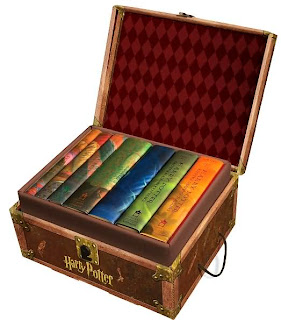 I've spent the last 6 weeks or so revisiting the Harry Potter series by JK Rowling. I had wanted to re-read this series for awhile, but am always wary of doing so right before one of the movies comes out. So, I put it off until after seeing The Half Blood Prince. Once I saw the movie, I couldn't put it off any longer!

I adore these books, and the movies, but had only read each of them once. I've seen each of the movies countless times - I have most of them memorized by now, but they never seem to lose their magic. I was a late-comer to the books. My husband had seen the first movie and had me watch it with him. After seeing that movie he became interested in the books and started to read them. I kept putting it off, thinking I would rather see all of the movies first. But eventually I had to give in. We both anxiously awaited the release of the final book when it came out, and we both get excited when a new movie comes out.

There were so many details from the books that I had forgotten! It was so much fun to re-read them, and I did so slowly, since the first time I had read through them so quickly. I really was able to enjoy each of them, and get things out of them that I hadn't before. I think my favorites still hold true. I love book 3 - The Prisoner of Azkaban. I also love book 5 - The Order of the Phoenix. After seeing the 6th movie, I think I enjoyed that book even more this time around. Book 7 is bittersweet...the end. It's great, but I'm sad to see it end. I'm thrilled there will be two movies, because I think they'll be able to get a lot of the details in...plus, I'm just excited that there are still going to be TWO more new movies, not just one. Something to look forward to.

Overall, these books are brilliant. I don't know anyone who has read them that hasn't loved them. I'd definitely say that it's the best series I've ever read. They are so magical! Anyone who hasn't picked these up yet definitely needs to do it. You won't regret it! I'm sure I'll be re-reading them again soon, probably after the last two movies are out.

I'm so far behind!

I haven't reviewed any books I read in July yet! It was a smaller number than previous months, so hopefully I'll be able to get caught up. I haven't been reading as much lately, but I'm enjoying the Harry Potter series for the second time right now. I'm taking my time getting through them.

One of these days I'll get some quick reviews up of the other books I read in July. Stay tuned!
Posted by Katie at 10:34 AM No comments: