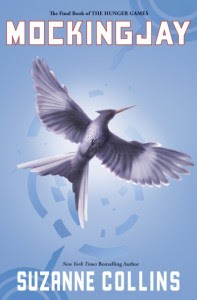 (Grrr, Blogger won't let me copy and paste a summary, I will try again later).

I have heard that some people weren't satisfied with the way the series was wrapped up, but I really enjoyed the book. I think no matter what had happened, some wouldn't have liked it. But I thought it was all very fitting.

I bawled like a baby for several parts, and cheered out loud at one point. It was just a great book, and an amazing series.

Overall, just a great series, and I'm really looking forward to reading them all again. I hadn't read Catching Fire since it came out, a year ago, so a few of the details were fuzzy for me, and I think I will catch a lot more (in all the books!) the second time around!