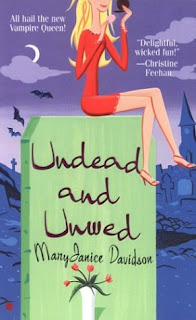 Summary from Barnes and Noble:
First Betsy Taylor loses her job, then she's killed in a car accident. But what really bites is that she can't seem to stay dead. And now her new friends have the ridiculous idea that Betsy is the prophesied vampire queen, and they want her help in overthrowing the most obnoxious power-hungry vampire in five centuries.

Undead and Unwed is the first book in an adult series. I wasn't really sure what to expect, but it was a good read. Lots of humor and the fact that the story was based in Minnesota was fun, since that's where I live. Betsy's a great main character, and I'm looking forward to reading the other books in this series!