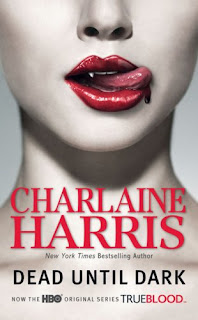 Dead Until Dark is the first book in the Sookie Stackhouse/Southern Vampires series. (The series has been made into an HBO show called True Blood.)

Sookie Stackhouse is a small town southern waitress with not much going on in her life. Until she meets Bill, a vampire. And falls in love with him. When women start turning up dead in town, she wonders if falling for a vampire is the smartest idea...

I've heard such good things about this series, and decided to finally start it. It was a switch for me since most of what I've been reading lately has been young adult themed. This is NOT a young adult book. (Not to say it's full of smut either, but there is adult content!).

I am intrigued by the characters, interested to find out more about the vampires (I've heard Eric plays a bigger role in later books), and looking forward to what's coming up. There are currently eight books in the series, with another one coming out this spring.